(Please note : the sites of these stone circles, although in the care of English Heritage, lie on private land.


You are welcome to visit them during daylight hours on payment of an entrance fee of £1.00 (please leave the money in the honesty box at gate from the car park). However, please do not take dogs with you, do not leave litter, and respect the country code.)

Stanton Drew lies off the beaten track and it is perhaps for this reason that its remarkable prehistoric stone circles have not received the same level of interest and exploration as their more famous relatives at Avebury and Stonehenge. This obscurity, and the lack of modern intrusions into their surroundings, has protected the solitude and character of these sites. Very little is known about them. The great stones (or megaliths), and the patterns they make in the landscape, remain mysterious; no excavations are recorded, nor have any modern surveys been made - that is, until very recently. This note provides you with a very brief background to the site and of the results of this new research.

The megalithic sites
There are three stone circles at Stanton Drew: the Great Circle being one of the largest in the country. The other two, to the south-west and north-east respectively are smaller. Both the great Circle and the north-east circle were approached from the north-east by short `avenues' of standing stones. Most of the stones have fallen, although a few still remain upright. In the garden of the village pub is a group of three large stones called The Cove, and to the north, across the river Chew, is the site of a standing stone called Hautville's Quoit. Their proximity to each other, and alignments between some of them, indicate that these sites are related as a single complex, and it is a fair assumption that Stanton Drew was once a place of primary significance during the later Stone Age. 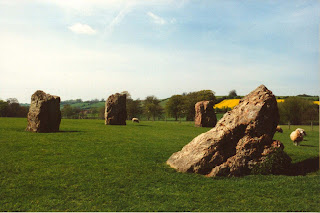 The circles are thought to have been originally noted by the famous antiquarian John Aubrey in 1664, and the first plan of them was published by William Stukeley in 1776. Although several other observers have written about them, they remain very much as first recorded over three hundred years ago. In the absence of many facts about the sites, the stones have attracted a considerable tradition of folklore. The most persistent tale is that the stones represent the members of a wedding party and its musicians, lured by the Devil to celebrate on the Sabbath and thus becoming petrified in their revels.

Stone circles such as those here are known to date broadly to the late Neolithic and early Bronze Age (approx 3000-2000 BC), and many examples are known, mostly from western and northern Britain. In southern England the stone circles and avenues at Avebury and Stonehenge testify to a long and complex history within a landscape dense in other evidence of prehistoric activity. The circles are believed to have played an important part in contemporary social and religious life, and there is evidence that some were aligned with major events of the solar and lunar calendar. They are difficult subjects to tackle archaeologically, though, and their interpretation is the subject of much discussion, a debate much enlivened by the interests and theories of the `New Age'.

Apart from the certainty that the stone settings at Stanton Drew share an affinity with ritual complexes such as Avebury, there is little material evidence to take this interpretation further. Contemporary prehistoric sites seem to be rare in the vicinity although they probably await discovery. In order to try and lift this veil of ignorance a little, and also to help improve the day-to-day management and presentation of the circles, English Heritage have recently initiated geophysical research at the site.

Archaeology and recent survey
Geophysical survey is a method of examining an archaeological site without having to dig it up. Several techniques can be used, but the one that has so far proved most effective at Stanton Drew is magnetometry. This relies on the fact that all soil is slightly magnetic and that this magnetism is concentrated and enhanced in many types of archaeological feature. Measurements made with a portable magnetometer, carried across the site at regularly spaced intervals, allows a picture of the local magnetic field to be built up. Magnetic `anomalies' are revealed in the subsequent computer plots as patterns which indicate the presence of buried features such as pits, ditches and hearths.

The Ancient Monuments Laboratory of English Heritage has carried out a magnetometer survey of the large field which contains the Great Circle and the north-east circle. The results have been astonishing and have, at a stroke, demonstrated that the megalithic remains at Stanton Drew are but the ruin of a much more elaborate and important site than had previously been dreamed of. Lying under the pasture within the Great Circle are the remains of a highly elaborate pattern of buried pits. They are arranged in nine rings concentric with the stone circle at the centre of which are further pits. The rings of pits vary in diameter, from about 23m to 95m. Although the magnetic signal is extremely weak, and it is difficult to make out individual features, it appears that the pits are about a metre or more in diameter and are spaced about a metre apart on the outer circle. 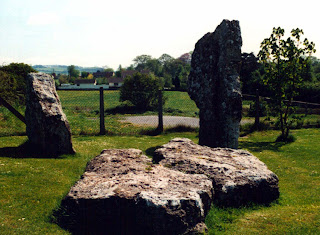 Just as remarkable is the discovery that the Great Circle is itself contained within a very large buried enclosure ditch (approximately 135m outer diameter). This is about 7m wide and has a broad gap or entrance facing to the north-east. Such enclosures, or henges, are a well known feature of later Neolithic Britain and are assumed to be the foci of ritual activity. Several henges enclose stone circles, and rings of pits are also a feature of some of them. Sites which bear the closest similarity to the patterns emerging at Stanton Drew include Woodhenge, near Stonehenge, and the Sanctuary, near Avebury. At these and other sites, the pits are known to have held timber uprights although it is not clear whether these were part of roofed or open structures. It seems probable that at least some of the pit circles at Stanton Drew once held massive posts. The circles are the largest and most numerous yet recorded at any site and surely indicate the investment of immense effort and enterprise in the service of prehistoric beliefs as yet only dimly perceived.

The magnetic survey also covered the area of the north-east stone circle and found at its centre a quadrilateral of four pits aligned with the opposing pairs of the 8 stones that comprise the circle. Here again is evidence of hidden elaboration: perhaps these are ritual pits, or they might be the holes of stones that have since been removed.

These results are thus very remarkable and will thrust Stanton Drew well into the limelight of research as scholars come to terms with the details and their implications. Although no excavation at the site is foreseen at present, further survey work is planned which will aim to explore other parts of the site (the south-western circle, for instance) and will try and refine details of the main henge complex.

The Wedding guests gathered in a field below Dundry Hill. It was Saturday evening, and a great fire had been lit, for the Wedding was over and the revels had begun. A Harper played in the field and so they danced into the night. As the time approached midnight the Harper reminded the dancing guests that it would soon be Sunday. The guests were very merry. They called for the Harper to continue, saying, "We shall dance till dawn, though we should have to call the Devil himself to play for us".

The Harper declined their request. He packed away his instrument and started to leave, treading his way quietly through the already damp grass of the field. As he moved away he heard the faint sound of piping behind him. He looked back. In the light of the fire saw the shadowy figure of a Piper moving to join the company. They welcomed him with open arms and so the dance went on. The Harper hurried on his way.

The Piper played and the people danced on into the night. Faster and faster the Piper played and the peopled danced whether they would or no. They cried and shrieked and cursed for the Piper to cease but he played on...The Piper laughed in the cold light of dawn. He raised his pipe again to his lips and played a haunting melody. The dammed souls of the wedding guests gathered close around and followed him into the mists of the netherworld.

The Harper returned to the field later on Sunday morning. In his haste to leave he had left behind his hat and now he thought to retrieve it. He found his hat easily; it had been placed jauntily on the top of one of the many stones that now stood in the field. The Harper counted the stones and though he could not be sure there seemed to be about forty six. "How odd," thought the Harper, "There were about that many wedding guests…". He ran from the field and never went near the place again.