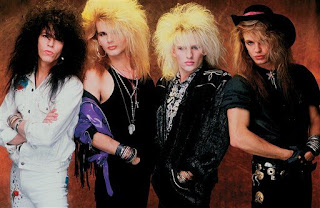 I have quite long hair (at the moment!) and today I am wearing it in two top knots.

As I was putting my hair up this morning I thought about the power of hair and how much it affects the way a person looks and feels...time for research (oh no you cry!!).

Over the years I have had most hair styles ranging from very short through to very long, straight, curly, every colour you can imagine and even a very funky 'Flock of Seagulls' cut in the 80's.

Human hair is a simple thing made of keratin and dead skin cells. Its function is to prevent heat loss from a person’s head, yet it also causes women to weep, men to buy sports cars and people to spend billions each year on its upkeep.

Throughout history, humans have used their hair to represent their class, indicate religious faith and upset their parents. Pop stars change their hair to represent each comeback, while apparently Donald Trump represents his wealth with a comb-over made from 40 kt gold. Samson used his hair to store his power, while Rapunzel used her hair to sneak the prince into her tower. 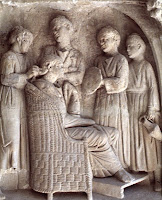 When the 2007 Cosco Busan oil spill occurred in the San Francisco Bay, a group of eco-friendly volunteers used mats of human hair to clean the beach. Hair absorbs oil from the water, working as a natural sponge.

After the oil is collected, oyster mushrooms are added to the mat. They absorb the oil and convert the environmental threat into nontoxic compost. Environmentalists would like these hair mats carried on oil tankers, so in case of a disaster the mats can be thrown in to start working immediately.


Finding hair in your food can ruin a meal. But, what if your food was made of hair -- or at least your condiment? The Internet Journal of Toxicology reported that the Chinese company Hongshuai Soy Sauce marketed their product as “using the latest bioengineering technology.” Priced lower than the competitors’ soy sauces, Hongshuai became popular on the shelves of Chinese stores. However, an investigation by journalists found the company didn’t use amino acids derived from soy and wheat, but amino acids derived from human hair swept off of barber's floors - ewwwwwww!

Peter the Great is cited as one of the greatest rulers from the 17th century, and he was a great friend to Russia. However, he was no friend to the beard. The emperor wanted Russia to become westernized, so he required all of his courtiers, state officials and the military to adopt western fashions and to shave their beards. This decree spread through the country until the only Russians exempted were peasants and priests. If a man refused to shave, he had to pay an annual beard tax of 100 rubles. Henry the VIII imposed a similar tax in England during part of his reign. However, as a fickle king who beheaded wives he no longer liked, he later grew a beard himself and ended the English beard tax. 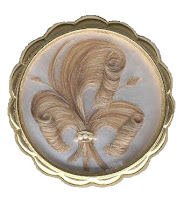 During the Victorian era, women often wore jewelry made from the hair of deceased loved ones. Since there were no photos of dear old grandma, her gray hairs paid homage. While it started as just a way to remember, hair art blossomed and become popular fashion. This may have been the most morbid fashion since Amazonians wore shrunken heads around their necks. To this day, there are a number of websites selling antique hair art and they will even fashion a new piece from a dead shih tzu’s hair.

Ancient Egyptians of all classes wore wigs. Wigs disguised deformities, guarded against lice, and made the hair look thicker, which was considered attractive. The Ancient Egyptian nobility also favoured very elaborate hairstyles. Wigs made hairstyling easier. High-quality wigs were made from human hair and could be afforded only by the rich. Less expensive wigs, which were available to the middle classes, were made from a mix of human hair and vegetable fibres.The cheapest wigs were made from vegetable fibres only. Wigs were meticulously cared for with emollients and oils, and with scented petals and chips of fragrant wood, such as cinnamon.

In seventeenth-century China, hair distinguished one cultural group from another. The majority of Chinese people were from a group called the Han. Traditionally, the Han Chinese wore their hair long and bound up on top of their heads. They believed that hair absorbed and stored spiritual power. Cutting the hair was considered a mutilation of the body. It was thought the hair protected the brain and that if it was shaved off the scalp would be exposed to the air causing illness.

The Yoruba sometimes refer to Homo sapiens as Eda, Omo Adáríhurun (Humanity, the species that grows hair mainly on the head), partly because the human body is not covered with hair like that of the lower animals, and partly because the hair that grows on the lower part of the abdomen is usually covered by dress. As such, only the hair on the human head and face is noticeable. The hair on the head (irun Orí) is often likened to a grove that must be well maintained to hallow the sanctuary that the physical head constitutes for the Ori Inu, the inner head. This is why Yoruba women have traditionally regarded hairdressing as a mark of honor to the inner head. It is believed that taking good care of one's hair is an indirect way of currying favor with one's Ori Inu. Thus, the Yoruba have created a wide range of hairstyles that not only reflect the primacy of the head but also communicate taste, status, occupation, and power, both temporal and spiritual.