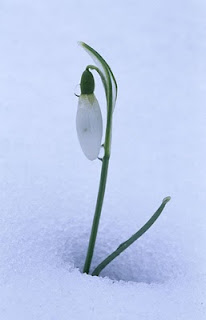 My patron Goddess is The Cailleach, I work with her all the time, she is with me always. But...according to legend and myth her reign is Samhain to Imbolc. So what do I do between Imbolc and Samhain? I know she is always with me whatever, and I have heard lots of stories of her transforming into the goddess Bride (or Brigid) in Spring.  This troubled me because I have never felt a connection to Bride.   Time for some research!  My findings led me to the conclusion (well the one that works for me) in that I have felt no connection to Bride because she and the Cailleach are not one and the same, but adversaries - well that explains a lot of my feelings!  This view is of course my opinion and may not be the same view of others ;-)

Cailleach and Bride:
At least one tradition views Bride and the Cailleach as being one and the same, with the Cailleach drinking from the Well of Youth at the beginning of each spring, whereby she is transformed into the youthful Bride. However most traditions in Scotland have them firmly pitted against each other as two differing personalities. Just like the sovereignty goddesses of Irish literature, who appeared as old hags or transformed themselves into beautiful young maidens upon being recognised by kings, the Cailleach has obvious transformative abilities.


This lore is encapsulated in perhaps the best known tale dealing with this legend, in Mackenzie's The Coming of Angus and Bride. Here, the Cailleach holds Bride captive because she is jealous of her beauty and because her son Angus is in love with the maiden. The Cailleach tells Bride to wash her cloak until it is white and so Bride labouriously does as she is bid, day after day without making any progress. The cloak remains as brown as ever until Father Winter appears and helps her out. Overjoyed, Bride returns to the Cailleach with the white cloak, and some snowdrops that Father Winter also gave her. Enraged by the sight of the flowers – clear evidence that the Cailleach's power was waning, she goes out with her magic hammer and causes frosts and storms all over the land.


Meanwhile, Angus dreams of the beautiful Bride and sees her terrible plight at the hands of the Cailleach. He sets out to rescue her, and in order to do so borrows three days from August, when the weather is calm and warm, to ensure a safe passage to where Bride is being kept. Searching high and low, and suffering great peril at the hands of the Cailleach who knew what he was about, Angus was finally united with his love on the first day of spring – Bride's Day. They married, and the Cailleach grew even more outraged and sent her hags to wage war against him and the brief respite from the harsh weather was marred once again by cold and frost as a result of the Cailleach borrowing three days from winter in her campaign against the forces of spring. Angus, however, determined to rule with his queen as King of Summer, fought back and eventually the hag was defeated. The Cailleach fled, and sitting on top of a mountain she wept and mourned for her loss.


It was on that day that Bride dipped her fair white hands in the high rivers and lochs which still retained ice. When she did so, the Ice Hag fell into a deep sleep from which she could not awake until summer and autumn were over and past.


Cailleach Bheur is said to reside at Ben Nevis, and ushers in the winter at Samhain by washing her cloak in the Corryvreckan (Coire Bhreacain - “the Cauldron of the Plaid” - a whirlpool found between the islands of Jura and Mull, which has a fearsome reputation of being unnavigable) – because no loch was big enough for it. Three days before she takes up her winter reign, three of her servants stir up the water to make it ready for her. The Cailleach then washes her cloak until it is white” (i.e. Covered in snow), and brings the cold, ice, snow, storms and is also said to cause the rivers to overflow throughout the winter.

There is a wonderful version of the story told here:
Bride & Angus told by David Campbell