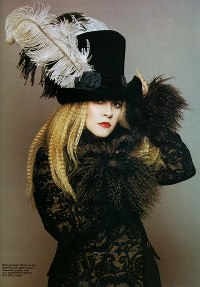 I received many beautiful and wonderful gifts this Yule, one of my favourite gifts was a Top Hat. I have wanted one for years, ever since I saw Stevie Nicks wearing one. Having seen recently quite a few appearing at witch gatherings too sealed my desire.

History of the top hat

In the 18e century, the young elegant class in England became what was known as Dandies. Many regard Charles II as the trendsetter and the first Dandy. The Grand Tour of Europe also took the English Dandy to Italy and France. In London, these travelled young men formed the 'Macaroni Club', bringing some southern elegance to their grey and overcast country. From 1770-1790, the Dandies of the Macaroni Club wore white neck-ties knotted into a bow.


At the start of the 19th century, George Bryan Brummel was the uncrowned king of the Dandies. Brummels disassociated himself from extreme fashion trends and announced the rule of thumb that still applies to this day: 'the sign of a good dresser is someone who does not attract attention'. Brummel advised King George IV: 'Tying a white neck-tie in a bow will have to be the highlight of everyday life'.

It was against this backdrop that the Silk Top Hat came into being in 1797 and made its way to the Netherlands from England via France. Although people already wore top hats in the 16th century, these were only covered in silk plush in 1797.

The wearer of the first top hat in England created an enormous stir. In January 1797, a certain Hetherington appeared in the streets of London. The hat maker walked along the thoroughfare wearing a top hat in the shape of a stovepipe. Within a short time, a large crowd had gathered around him. There was such chaos that the 'officer of the law' grabbed Hetherington by the collar and summonsed him before the court. He was accused of disturbing public order.

The officer, who dealt with the scandal, described the offence as follows: "Hetherington had such a tall and shiny construction on his head that it must have terrified nervous people. The sight of this construction was so overstated that various women fainted, children began to cry and dogs started to bark. One child broke his arm among all the jostling."

The hat maker relied in his defence on the right of every Englishman to place what he wanted on his head.

The London newspaper, The Times, wrote the following day: "Hetherington's hat points to a significant advance in the transformation of dress. Sooner or later, everyone will accept this headwear. We believe that both the court and the police made a mistake here."

The Times was right. Hat manufacturers in England made a substantial amount of money from this 'extravagant construction'.

During the Empire Period (1800-1850), the hats - which were much taller and basically straight-sided - were called 'stovepipe hats'.

The black silk top hat was made from cheesecloth, linen, flannel and shellac. Using various types of flat-irons, the shellac was 'baked' in the linen around a five-piece wooden hat block and covered with black silk plush, which came mostly from France. Only the master tradesman (foreman) was permitted to cut the expensive silk. The hat was finished with a 2½ to 3 cm wide cloth hatband, which was later replaced by one of ribbed silk. The brim of the hat also had a ribbed band. During this early Victorian time - i.e. approximately 1830 - top hats were extremely tall, some even reaching 20 cm.

Source: silktophats.eu
Posted by Unknown at 10:37