Holly - a tree of restored direction 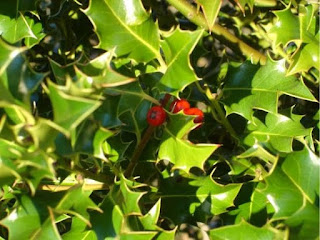 I am getting a little bit festive I must admit, so you may see some Yuletide blogs on here now...

Holly - A tree of restored direction

Holly is the 8th tree of the Celtic Tree Ogham, representing restored balance, restored direction, unconditional love and increased detachment from emotional turmoil. Ruled by Mars, it provides the raw energy to get things done.

Evergreen holly is a potent symbol of the life force in the depths of the winter. Symbolising everlasting life, it is used for Winter Solstice and Christmas decorations.

Holly is associated with both female and male and in former times care was taken to bring equal amounts of prickly holly and smooth holly into the house. The prickly holly was good for men and the smooth holly was the she holly, good for women. The red berries are associated with the female blood of life and the more berries, the more good fortune for the year ahead. The male aspect is linked to the Green Man and the GreenKnight who represents the testing of the Spirit.

Holly has always been regarded as a tree of great strength, a positive force that brings balance and restored direction. Throughout our folklore it is a symbol of justice and steadfastness in adversity.

The Holly King represents a great spiritual warrior, ready to protect the natural world at the most vulnerable time of the year. He fights alongside the Oak King at Midwinter and Midsummer and is the guardian of the two great turning points of the year and a symbol of transformation.

Traditionally, holly was planted near the house to bring protetion from evil, disturbed spirits, poisoned thoughts and lightening. As it was considered to be a tree of good fortune, it was thought to be unlucky to cut it down.

Holly represents the potency of the life force in the midst of darkness. It brings a balanced power that will guide us towards a positive action.

All negative emotions greatly weaken the life force by causing constant inner turmoil. They create negative patterns of thought which affet the body and cause illness. When we are aware of the repercussions that our negative emotions can have on those around us, we learn to accept responsibility for our actions.

Holly encourages us to communicate and express our feelings, to bring things out into the open, so that resolution is possible. Its message is to direct your thoughts wisely, to resolve any problems by open communication and a loving outlook.

Holly is a tree that brings transformation and restored direction. It represents fire in the spirit, the power of our will to bring change for the good of all.

This was taken from a wonderful book called Earth Wisdom by Glennie Kindred.
Posted by Unknown at 09:49