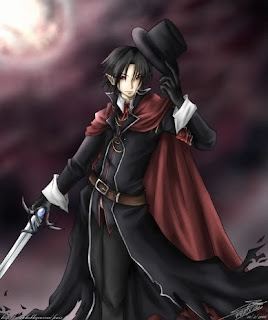 Can you tell Samhain (Halloween) is round the corner? ;-)

The legend of the vampire found its lasting existence fueled by superstition surrounding historical acts of cruelty by select European leaders and peasant fears, including the horrendous historical character Vlad the Impaler.

The legend of the vampire appears to be an amalgam of various superstitions that rolled into one entity. The widespread belief that the dead could return to visit the living through Samhain, Halloween or All Saints Day. The existence of real maniacs running around and hurting people and allowing a superstition to cover their evil tracks. Premature burial, which often occurred before embalming became a necessary practice. Gossip – a person who was an outcast when alive remained outcast after death and plagues and epidemics.

Ever since Homer’s time, western nations had the fixed idea that blood combined with the light of the moon could recall the dead to life, at least temporarily. Churchmen of the middle ages claimed that a woman who exposed her body to the moonlight would conceive and bear a vampire child. The church sanctioned the belief in vampires and taught that vampires could only walk under the light of the moon. Their prime concern? Finding blood.

We find the belief in vampires appearing in Babylon and Assyria, where it was thought that the dead could rise and walk the earth, seeking sustenance from the living. The vampires of Crete, called Katalkanas, were blamed for ill deeds, and were said to live in the mountains. In Germany food was buried with the dead, or rice and grain scattered on the grave, to assuage the hunger pangs of the Nachzehrer, who might issue forth from the grave in the form of a pig. In Bulgaria the Vrykolaka were said to be passive vampires in life who became active after death. Up until the twentieth century, vampire depictions contained horrendous faces, malformed body parts, little hair and drooling spittle - sometimes appearing more as an ugly beast on two feet rather than carrying pleasant human attributes. (Until Anne Rice made them sexy!).

The more modern vampire tends to go in two directions – the bad vampire and the good vampire (where the good vampire finds true love in a human woman and kills only bad people – or in the case of Twilight – is a veggie vampire!). The association with the lifestyle of the vampire leads him or her to the logical link with Halloween – a night of the dead, undead (perhaps the correct term these days would be living impaired) and quaking living.

The vampire’s association with Halloween/Samhain is tenuous, as the vampire legend does not depend on or encompass this holiday, but if ghosts can walk this night, then why can’t vampires? Our association with the vampire, the bat and the Witch come from two different sources. First, we all know that there is a type of vampire bat that drinks the blood of animals, which is therefore associated with the mythical vampire. Historical references link bats to Samhain bonfires, where the light of the fire drew moths, which in turn provided a feeding frenzy for bats. When the burning of the Witches commenced, the same principle applied, thus the superstitions believed that a Witch could turn herself into a bat, or that her spirit could fly away in the shape of a bat, because moths and bats were drawn to the burning Witches.

Source – Halloween by Silver Ravenwolf
Posted by Unknown at 11:18