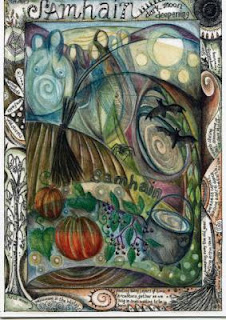 What is Samhain?
Samhain is known by most people as Halloween, but for Witches and Pagans it's considered a Sabbat to honor the ancestors who came before us.

The most magical night of the year. Exactly opposite Beltane on the wheel of the year, Samhain is Beltane's dark twin. A night of glowing jack-o-lanterns, bobbing for apples, tricks or treats, and dressing in costume. A night of ghost stories and seances, tarot card readings and scrying with mirrors. A night of power, when the veil that separates our world from the Otherworld is at its thinnest.

Religious scholars agree that the word Samhain (pronounced "sow-en") comes from the Gaelic “Samhuin". The Celts called it Samhain, which means 'summer's end', according to their ancient two-fold division of the year, when summer ran from Beltane to Samhain and winter ran from Samhain to Beltane. According to the later four-fold division of the year, Samhain is seen as 'autumn's end' and the beginning of winter.

Around the eighth century or so, the Catholic Church decided to use November 1st as All Saints Day. This was actually a pretty smart move on their part – the local pagans were already celebrating that day anyway, so it made sense to use it as a church holiday. All Saints’ became the festival to honor any saint who didn’t already have a day of his or her own. The mass which was said on All Saints’ was called Allhallowmas – the mass of all those who are hallowed. The night before naturally became known as All Hallows Eve, and eventually morphed into what we call Halloween.

The Witch's New Year:
Sunset on Samhain is the beginning of the Celtic New Year. The old year has passed, the harvest has been gathered, cattle and sheep have been brought in from the fields, and the leaves have fallen from the trees. The earth slowly begins to die around us.

This is a good time for us to look at wrapping up the old and preparing for the new in our lives. Think about the things you did in the last twelve months. Have you left anything unresolved? If so, now is the time to wrap things up. Once you’ve gotten all that unfinished stuff cleared away, and out of your life, then you can begin looking towards the next year.

Honoring the Ancestors:
For some of us, Samhain is when we honor our ancestors who came before us. If you’ve ever done genealogy research, or if you’ve had a loved one die in the past year, this is the perfect night to celebrate their memory. If we’re fortunate, they will return to communicate with us from beyond the veil, and offer advice, protection and guidance for the upcoming year.

Customs:
Perhaps the most famous icon of the holiday is the jack-o-lantern. Various authorities attribute it to either Scottish or Irish origin. However, it seems clear that it was used as a lantern by people who traveled the road this night, the scary face to frighten away spirits or faeries who might otherwise lead one astray. Set on porches and in windows, they cast the same spell of protection over the household. (The American pumpkin seems to have forever superseded the European gourd as the jack-o-lantern of choice.)

Bobbing for apples may well represent the remnants of a Pagan 'baptism' rite called a 'seining', according to some writers. The water-filled tub is a latter-day Cauldron of Regeneration, into which the novice's head is immersed.

The custom of dressing in costume and 'trick-or-treating' is of Celtic origin. However, there are some important differences from the modern version. In the first place, the custom was not relegated to children, but was actively indulged in by adults as well. Also, the 'treat' which was required was often one of spirits (the liquid variety). And in ancient times, the roving bands would sing seasonal carols from house to house, making the tradition very similar to Yuletide wassailing. In fact, the custom known as 'caroling', now connected exclusively with mid-winter, was once practiced at all the major holidays.

Finally, in Scotland at least, the tradition of dressing in costume consisted almost exclusively of cross-dressing (i.e., men dressing as women, and women as men). It seems as though ancient societies provided an opportunity for people to 'try on' the role of the opposite gender for one night of the year.

To Witches, Halloween is one of the four High Holidays, or Greater Sabbats, or cross-quarter days. Because it is the most important holiday of the year, it is sometimes called 'THE Great Sabbat.'

The image I have used here is available as a card from:
http://www.goddessandgreenman.co.uk/
Posted by Unknown at 10:57