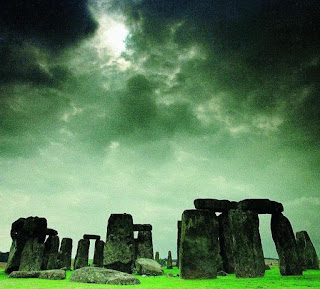 Lately I have been drawn to Merlin, everywhere I turn I find him, today was no different. I was gifted a wonderful piece of Preseli Bluestone – the stone that the inner Stonehenge circle is made from. So I did some research…

Around 2100 BC the Preseli Bluestones were brought from West Wales to Stonehenge and erected in a circle (the X and Y Holes). Around 100 years later, this first Bluestone circle was dismantled and work began on the final stage of the site. The Bluestones were rearranged in the horseshoe and circle that we can still see today.

Although we now believe that we know how the stones were erected, the reason why the Bluestones were brought from over 250 miles away from the Preseli Hills in Pembrokeshire, West Wales has remained a mystery. There has been much speculation and research as to how the feat was achieved.

The mythology attached to the moving of the Preseli Bluestones to Stonehenge has been attributed to the magic of Merlin. In Geoffrey of Monmouth's Historia, Aurelius Ambrosius sends his brother Uther to bring the Giant's Dance from Mount Killaraus in Ireland, at the suggestion of Merlin, to be used as a memorial for the dead slain in the Night of the Long Knives. It is probable that this account contains a trace of an oral tradition that the stones were transported from a great distance, over water, by 'superhuman' powers. At this time, the Preseli Hills were ruled over by the Kings of Ireland. However, the Merlin talked about in the 12th Century and the Merlin of the Welsh legends supposedly existed during the Dark Ages, some 4,000 years after the Bluestones were moved.

To medieval man in Geoffrey of Monmouth's time, the stones were so huge and unwieldy that none of their own engineering techniques would have been capable of moving or erecting them, so it is only natural that they believed that such an undertaking was a magical one. As Arthur C Clarke said "Any sufficiently advanced technology is indistinguishable from magic", although perhaps in this case it should be considered as any sufficiently different technology.

One current theory speculates that the stones were dragged by roller and sledge from the inland Preseli Hills to the sea at Milford Haven. From there they were sailed along the Welsh south coast to Bristol, then up the Avon to a point near what is now Frome in Somerset. From there the stones were probably pulled overland to a place near what is now Warminster in Wiltshire and then floated down River Wylye to Salisbury, up the Salisbury part of the Avon river to West Amesbury, near Stonehenge.

In 2000 a group of local volunteers from Pembrokeshire gathered to attempt to re-enact this ancestral journey by moving one three-ton Preseli Bluestone block from its source in the Preseli Hills to Stonehenge as a Millennium Project. The idea was to use wooden rollers for the land routes and a curach raft for the sea route from Milford Haven to Bristol and then to take it up the River Avon with the final overland journey to Salisbury Plain. Unfortunately the design of the raft failed and the project was abandoned through lack of funds.

In fact, this was not the first time that such a project had been undertaken. In 1954, the boys from Bryanston and Canford Schools in Dorset attempted a similar feat. They moved a four-ton concrete block over a short distance of land and floated it to show that such a thing was possible. Another recent Stonehenge project was the raising of a 40-tonne trilithon made out of concrete that a team of engineers successfully completed for the BBC series "Secrets of Lost Civilisations", using the ancient technology of levers and wooden A frames.

There are still some academics who believe that the stones were moved by glaciation as 'erratics', but our having recently submitted Preseli Bluestones to geological analysis and that of previous researchers concludes there is no doubt that all of the 45 Bluestones left at Stonehenge come from the Preseli Hills, with each stone identifiable to specific areas of those hills and they have no glaciation markings on them. There are certainly no other stones on Salisbury Plain showing glaciation markings. The environmental archaeology of the area also disputes this geological theory (see Boscombe Bowmen).

The 45 remaining stones at Stonehenge, now called Bluestones, are in fact a mixture of spotted dolerite, blue dolerite, rhyolite, volcanic ash and one of Cocheston sandstone (which is a pale green stone studded with garnets). This particular stone is commonly called 'The Altar Stone' and also has its source near Preseli. It would thus seem that they had a very particular 'shopping list' when they chose their stones, although the effort in obtaining them was considerable. Of course, there is no reason to suppose that these primitive people were not able to harness the use of beasts of burden to move the stones across land and so the difficulties of the movement and the erection of the stones are now overcome but we are still left with the question why? Why these stones? Now at last, after 5,000 years, we believe that we have uncovered this part of the mystery.

The geological name for Preseli Bluestone is Dolerite which is an intrusive volcanic rock of plagioclase feldspar and is in fact harder than granite. Forms of dolerite are found all over the world and were used for making tools to work on granite statues in ancient Egypt. Polished Bluestone axe-heads from Preseli have also been found but whether these were ceremonial axe-heads or actually used as tools is unknown. In 2001 I discovered a memorial stone in the Preseli Hills which had been polished and then, during a geological survey, the Bluestones were cut open and then the proverbial penny dropped. Inside the stones we found feldspar crystal formations and mica. When polished, the stone looks like the night sky studded with stars and now, having seen its beauty when polished, it seemed obvious to me that this was reason enough to move them and erect a circle of them. The ancient Egyptians revered Lapis Lazuli (Blue Stone) for the same reason.

The Preseli Hills themselves are crisscrossed with ley lines, ancient trackways, standing stones, burial chambers and stone circles and the hills sparkle with shining white crystal quartz. Even during early Christian times, the place was considered almost as holy as Jerusalem and Rome. This is also the land of Druids who still continue this 5,000-year old tradition of building stone circles in Wales each year for their National Eisteddfods.

Locally, the stones are considered as stones of healing and magical and as stated in the early Welsh mythologies, such as the Red Book of Hergest and the Black Book of Carmarthen, Merlin transported some of them to build Camelot, thus Preseli is Merlin and Arthur territory, home to the fairies and gods of the Underworld.