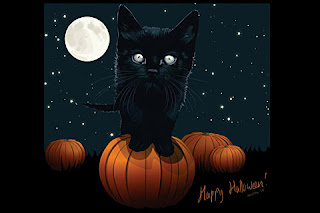 Our modern Halloween just wouldn’t be the same without the traditional pictures of the black cat – claws extended, back arched and tail fluffed. How did your kitties wander into Halloween?

We first find cat mythology in ancient goddess worship; the Teutonic Freya rode in a chariot drawn by cats, Artemis-Diana often appeared in cat form and of course we have the Egyptian deity Bast.

Domestic cats were not introduced into Northern Europe until after 1050 CE and the wild cat in Scotland sometimes cited by historians appears to be a wild hare. A language conversion might be responsible for this error.

White hares were thought to be sacred by the ancient Celts, and they believed that these animals could contain the souls of the dead who wished to visit the living. This does not mean they thought the rabbits were dead, but that the rabbit could be a vessel for a temporary and welcomed visitation. There is no evidence that the Celts believed in reincarnation or in permanent transmigration of the soul.

Checking history, we find only one fully developed centralized religion that honoured our feline friends. During the cat’s two thousand year incarnation in Egyptian history, the cat came to symbolize the goddess energy of the religion. The earliest known portrait of Bast was found in a temple of the fifth dynasty (about 3000BCE). When the people wanted a fierce goddess to protect them, they called on Sekhmet; when they wanted a gentler goddess or more personal assistance, they called upon Bast. The Egyptian trinity was known as Sekhmet-Bast-Ra.

The negative superstition tied to cats could have begun with the Romans when a foolish Roman soldier killed a cat and a mob broke into his house and removed him from this earthly plane. Several centuries later, the negative association with cats came from Inquisitor Nicholas Remy, who claimed that all cats were demons. In 1387 Lombard Witches were said to worship the devil as a cat and medieval Christians exposed cats to torture and fire along with Witches. At certain festivals, such as Midsummer, Easter and Shrove Tuesday, it was customary to burn cats in wicker cages in accordance with these church beliefs. The cats, however, appear to have gotten their revenge as the Black Death, a form of bubonic plague, killed over twenty seven million people during the Middle Ages. Had the church let the people keep their cats, the fleas (which carry the disease) on the rats may not have brought Europe to its knees.

The cat, with its association to goddess worship, was not a favourite of the Christian Church. As the church had already devalued women, subjecting human females to torture and murder, what was a mere cat? Once the early Christians got it into their heads that Witches could change themselves into cats, there was no stopping them. Trial after trial, women were tortured into babbling that they had turned themselves into these sleek and sneaky animals. The myth gained momentum and has continued to live in horror films of today.

As superstition began to abate in the 1930s and 40s, the black cat became a fun and familiar symbol of Halloween. Already linked for centuries to Witches, these furry friends vaulted into the limelight of Halloween parties without any difficulty at all. Once seen as unlucky visitors in any household, the modern Halloween feline does his or her duty by scaring away the nasties that go bump in the night. Cats, however like to show off their catches to their human mommies and daddies, so you might not want to open the door to see kitty’s surprise on Samhain Eve!.....

Source – Halloween by Silver Ravenwolf
Posted by Unknown at 20:34