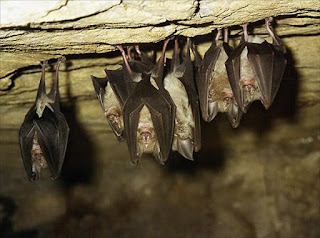 Being nocturnal Bats have long been associated with evil, and seem to have had a lot of bad press. Personally I love them, when we were out in France earlier this year we saw little tiny baby ones flying around - beautiful!

In some parts they were thought to be Witches, and one flying close to you it was said to be a Witch over looking or trying to bewitch you.

Having said that I have heard it said that bats flying close to the house indicate that the spirits of Witches past are looking out for you. Should one fly into the house it portends death or very bad luck for someone you know. In other places the bat is considered lucky, and carrying a bat’s bone will ensure good fortune (although not for the bat ;-))

It used to be thought that carrying the right eye of a bat will render a person invisible. A bat hitting the side of a building is said to foretell rain whilst seeing them fly near the house in the early dusk means good weather is coming.

Some people believe that ghosts can take the form of bats, therefore a house with bats in it is haunted.

There is also a superstition that if you carry the dried heart of a bat in your pocket it will turn a bullet or stop you from bleeding to death. Another belief is if you wash your face in bat’s blood you can see in the dark.

In Scotland, it is said that a flying bat, rising and then descending, does so near a witch’s house.

Contrary to many beliefs, bats do not get entangled in long hair. Experiments have proven that not only do bats try to avoid people, but that no amount of hair will prevent one from immediately freeing itself. Furthermore, although a couple of varieties will drink the blood of animals, most bats are vegetarian and will not bite unless provoked.

In many parts of the world it is considered very unlucky to kill or harm a bat and could even shorten your life. This is probably just as well as many bats are endangered and need all the protection they can get.

Bat Animal Symbolism
Let's face it, the bat isn't the most popular of animal totems. In fact, it's largely misunderstood and so therefore many of its symbolic meanings are inappropriately fear-based.
However, the very savvy Native Americans approached the realm of animals from a position of honor - knowing that all things are connected.
The Native American animal symbolism of the bat comes from a keen observation of this magnificent animal. These people recognized that the bat was highly sensitive to their surroundings and so therefore was considered a symbol of intuition, dreaming and vision. This made the bat a powerful symbol for Native American shamans and medicine people. Often the spirit of the bat would be invoked when special energy was needed, like "night-sight" which is the ability to see through illusion or ambiguity and dive straight to the truth of matters.
It is a symbol of communication because the Native Americans observed the bat to be a highly social creature. Indeed, the bat has strong family ties. They are very nurturing, exhibiting verbal communication, touching, and sensitivity to members of their group.
Here is a quick-list of bat animal symbolism:
• Illusion
• Rebirth
• Dreams
• Intuition
• Initiation
• Journeying
• Inner Depth
• Communication
The bat is a symbol of rebirth and depth because it is a creature that lives in the belly of the Mother (Earth). From the womb-like caves it emerges every evening at dusk. And so - from the womb it is reborn every evening.
If you have the bat as your totem you are extremely aware of your surroundings. Sometimes you can be overly sensitive to the feelings of others. Additionally, you are quite perceptive on a psychic level, and are prone to have prophetic dreams.
If you work with the bat as your totem, you will be put to the test, because it demands 100% commitment to spiritual growth. The bat will never accept half-hearted or lukewarm attempts at self-improvement. Indeed, if the bat senses that you are slacking in your psychic/spiritual training it will likely move on to someone else who is more willing to learn the lessons the bat has to offer.
As with most of our hardest challenges, working with the demanding bat will reap some of the most profound rewards you could ever dream of. But be warned, the bat asks a lot of us, like:
• Dying to our ego
• Loving our enemies as ourselves
• Going within to touch our inner demons
• Exploring the underworlds of reality (which can be scary)
• Renewing our thoughts and beliefs on a moment-to-moment basis
All of these tasks can be harrowing experiences. This is why the Native American symbolism of the bat deals with initiation; because this creature takes us to outlandish extremes. But rest assured, the bat is never leaves our side while we are journeying.
Furthermore, once we are tested to satisfaction, the devotion of the bat will never fade. It will eternally support us on our spiritual path - ever faithful and forever loving us on our journey to maintain our highest potential.
Tansy
x

Sources: A Witches Year by Kate West
http://www.whats-your-sign.com/
Posted by Unknown at 08:27