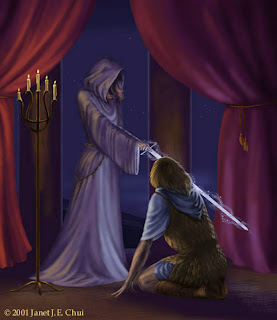 I initiated into the Sacred Mists Tradition of Witchcraft a couple of years ago, having passed my first degree two years previously, and hopefully this year I will have the opportunity to initiate into the second degree, as I am now working on my third degree.

A question raised within the Progressive Magick course I am currently taking with Sacred Mists, run by Janet Farrar & Gavin Bone, got me to thinking about initiation itself:-


The dictionary meaning of the word ‘initiation’ is - Initiation is a rite of passage ceremony marking entrance or acceptance into a group or society. It could also be a formal admission to adulthood in a community or one of its formal components. In an extended sense it can also signify a transformation in which the initiate is 'reborn' into a new role.

A spiritual initiation rite normally implies a shepherding process where those who are at a higher level guide the initiate through a process of greater exposure of knowledge. This may include the revelation of secrets, hence the term secret society for such organizations, usually reserved for those at the higher level of understanding.

In the context of ritual magic and esotericism, an initiation is considered to cause a fundamental process of change to begin within the person being initiated.

The initiation process is often likened to a simultaneous death and rebirth, because as well as being a beginning it also implies an ending as existence on one level drops away in an ascension to the next.

Initiation into a coven is achieved by passing a test (physical or symbolic or both) which invokes a new awakening and spiritual feeling within the candidate. It should be a promise of unity in thought and belief as shared by the whole sect (a melding of consciousness if you will in order to achieve goals together).

As it is above so shall it be below or as it is on the inside so shall it be on the outside. Group Initiation helps us to break down the barriers between planes and be led down a path that has been well beaten by predecessors

Held to be one of the most ancient of rites, an initiation marks the psychological crossing of a threshold into new territories, knowledge and abilities. The major themes of the initiation are suffering, death and rebirth. The initiate undergoes an ordeal that is symbolic of physically dying, and is symbolically reborn as a new person possessing new knowledge.

In neo-Pagan Witchcraft, the initiation marks the entrance of the initiate into a closed and traditionally secret society; opens the door to the learning of ritual secrets, magic and the development and use of psychic powers; marks a spiritual transformation, in which the initiate begins a journey into Self and toward the Divine Force; and marks the beginning of a new religious faith

Initiations can be written exclusively for the person being initiated or they are ceremonies passed down over the years and that everyone partakes of through the generations. Some see initiation as a sort of graduation ceremony—congrats, you’ve done the work and now are officially full-fledged members of the group—and others as an indication and pledge that this is but the beginning of your training.

Still, once you’ve dedicated yourself to the calling and have taking the plunge of initiation, there’s no real going back. The Craft has that in common with the rites that transform one from a child to an adult. The work doesn’t end there, either. Even in those groups who see initiation as a graduation, there’s always more to discover and learn and more growing to do. Perhaps, a Craft initiation stands out as a cross between an adoption ceremony and a personal dedication. We are adopted by our new “clan” or “tribe,” no matter how large or small, and we dedicate ourselves to exploration of the mysteries of our new life, knowing there will be other markers to herald our progress along that path.