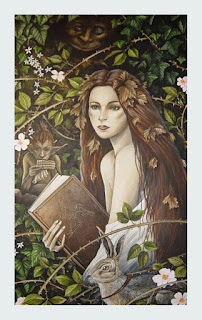 Yesterday I was talking with some friends about Hedgewitchery, so I decided to do some research today to see what information I could find to explain what it actually is.

I can recommend reading any of Rae Beth’s Hedge Witch books, she is herself a hedge witch and a wild wood mystic and writes beautifully. Her books were some of the first ones I ever read on witchcraft. Her website is http://www.raebeth.com

Hedge Witchcraft is the natural magic of hedgerow and forest, hilltop and seashore. It can be and is often practised indoors but our contacts with the nature spirits and the Fae and our communion with and respect for the natural world are all important. This is Green Spirituality of the environment as well as an ancient and effective way to resolve problems. When it comes to enhancing the quality of our lives it works extremely well but it is not a quick fix necessarily. Rather, it turns our lives into a true magical quest. And you could study Hedge witchcraft for many lifetimes, (perhaps you already have). Yet you could never get to an end of it because it is aligned with life’s cycles of change and growth. However, you can experience its effects and get real results even as a beginner (if you are of the type whose heart lifts when entering realms of natural magic).

The information below I found on the internet (walkingthehedge.com)

Hedgewitchy or Hedgecraft, is a kind of combination of Witchcraft and Shamanism. This Path is based on the Traditional Witchcraft and Cunning Folk traditions of Europe from ancient to modern times. It is an something of an “eclectic” tradition, but just how much so depends on each individual practitioner.

It is shamanic with herbalism, healing, and a deep love for, and understanding of Nature added to the mix.

Hedgecraft is loosely based on the old wise women (and men), cunning folk, herbalists, faith healers and actual witches throughout history.

If you picture the strange old lady who sold herbs and magickal charms, acted as midwife and healer in the ancient times, you are not far off. Nor are you far off if you picture the wise sage who would cast bones to divine the future or journey in the Otherworld to heal members of his community. Modern Hedgecraft is the study, adaptation and practice of these ancient nature-based, spiritual and healing traditions in our modern lives.

Hedgewitches are not opposed to the study of modern tradition as well, for they strive to bridge the gap between old and new. To blend old traditions with a modern lifestyle in a workable and practical manner is a hallmark of Hedgecraft.

The basic modern definition of Hedgewitch would be comparable to another ancient culture’s definition of wisewoman, cunning man, medicine man, shaman, herb or faith healer etc.

There is a fair bit of variation in spelling, such as “hedgewytch”. A few other names often used for this Craft: Hedge-Rider, Night Travelers, Myrk-Riders, Gandreidh (wand-rider), Cunning Folk, and Walkers on the Wind.

For the Hedgewitch, “the Hedge” is a metaphor for the line drawn between this world and the next; between reality and dream, between the Upper, Middle, and Lower Worlds. In short, the Hedge is what many Pagans refer to as the Veil. It is also simply the boundary between civilization and the wild.

This concept of a boundary hedge in a spiritual and magickal sense is from the European (especially British) tradition of hedgelaying. Going back even to the Iron Age, the European landscape has been crisscrossed by hedgerows. Hedgerows are carefully grown and landscaped intricate layers of plant-life. These often-large rows of shrub, bush and tree were boundaries for farmsteads, pastures, villages, ditches and such. Often times, at the very edge of a human settlement was a sturdy hedgerow keeping the wilderness and wildlife out of field, pasture and garden.

Crossing a hedge often meant crossing a boundary of some sort, such as walking into the wild, going from wheat field to cow pasture, or entering another person’s property. A hedgerow is not just a boundary but is also a protective home and shelter to all kinds of wildlife, such as rabbits and birds, as well as providing shade and acting as a windbreak. Hedgerows were also very important in keeping the herds in and the predators out, as well as marking the territorial boundaries of human settlements. Often berry and fruit bearing trees and shrubs are grown in hedgerows, making them a source of edible and healing plants for both animal and human alike. The more one learns of the tradition of laying hedgerows and the tradition of Hedgecraft, the more the use of “hedge” for this Craft becomes clearly appropriate.

Throughout history and in many cultures the “Hedgewitch” (wisewoman, cunning man, shaman etc) lived at the edge of the community, often amongst the outlying hedgerows. They scratched out a living through herbalism, understanding nature, prophecy and divination as well as magick and healing. They served the community in many ways including but not only; midwifery, healing, protection spells, house blessings, crop and livestock blessings, through the selling of magickal charms and even curses.

A “Hedgewitch” might sell one member of her community a small curse or ill-wish one day, and then charge its victim a fee to break the curse the next. Therefore, people who followed such traditions were respected, and likely a little feared, because of these abilities, and because they had such a close relationship with nature and the spiritual world.

A Cottage/Hearthwitch, Greenwitch or Kitchenwitch works mostly in her garden and in her home. Hedgewitch will practice largely in the home as well, but will likely spend more of her time gathering her herbs and practicing her craft in rural or wild places than many other Witches. A Cottage/Hearthwitch, Greenwitch or Kitchenwitch may use some trance or shamanic techniques in her practise, but has probably not have received the call from her spirits to Shamanize. A Hedgewitch has “fire in the head” also commonly known in this Path as the Cunning Fire.

Although many of the traditions that a Hedgewitch draws from have changed, after all lore is lost and knowledge changes over the centuries, you will find most Hedgewitches prefer to practice as close to traditionally as possible but still in a manner practical for these modern times. Hedgewitches are very adaptable. You may find a Hedgewitch casting an old-fashioned prosperity or fertility spell on a modern tractor as a favour to a neighbour, for example.

Hedgewitches use herbs and herbal concoctions known as flying ointments, as well as shamanic techniques such as drumming and meditation, to induce altered states of consciousness. They work with familiar spirits, their ancestral dead, plant and animal Totems and the like, to assist in their Otherworld work.

Hedgewitches often refer to shamanic journeys as “Walking the Hedge”, “Riding the Hedge”, “Oot and Aboot” or “Crossing/Jumping the Hedge”. They also have a tendency to spend much of their lives with one foot on either side of the Hedge, which makes them eccentric to say the least.
A Hedgewitch walks freely into caol ait (Gaelic), the “thin places” between one world and another. More experienced Hedgewitches learn not only to find such places, but how to use them effectively and how to open them even when the Hedge, or Veil, is at its thickest between the high days.

Spirituality in Hedgewitches varies and depends on the individual; usually they look to their own heritage and ancestry. The only tradition Hedgewitches typically follow is a reverence for Nature, though some may come from a more formal Pagan path originally. Some Hedgewitches will also practice a form of Traditional Witchcraft, while more and more Wiccans are also taking up the work of a Hedgewitch. Hedgewitches commonly do practice some form of Paganism, but many make no claim to any practice but that of Hedgecraft or Hedgeriding.

The main distinction between Hedgewitchery and other forms of Witchcraft is that Hedgewitches often have less interest in the religious/ceremonial aspects of coven or group Witchcraft, having an individual and often unique way of relating to life, spirituality, magick and Creation. A Hedgewitch is less likely to perform scripted magickal workings, preferring the freedom and joyfulness of spontaneous workings that come from the heart. For the Hedgewitch there is no separation between normal life and their magickal one, for their normal life is magickal. They avoid complicated, ceremonial, scripted and formulated ritual, practicing an earthy and simple form of ritual and magick. Some Hedgewitches do not cast Circles in a Wiccan sense, and may either have other methods to mark sacred space, or not bother at all. Hedgewitches believe that all space is sacred. Hedgewitches do what ever comes natural to them; they follow their instincts, and their heart.

They do not typically follow one particular moral code, but rather their own personal ethics and often some version of the credo to “do only what is needed” and/or “Know Thyself”.

Hedgewitches walk the Crooked Path, the Path that winds and twists its way between the right-hand and left-hand Paths. Hedgewitches walk all borders, and prefer the grey areas, having little interest in all black, or all white, magick or spiritual workings.

Most use few synthetic objects in their spells and rituals. Their tools are typically very practical, such as a walking stick, often they will use a stang, or even pruning shears, and their tools are hand made by them as much as possible. Most Hedgewitches use only what is needed, meaning they do not clutter an altar (if they should use an altar at all) with items that will not be actively used during a working or rite.

Hedgewitches usually study herbalism, wildcrafting and wortcunning with gusto, as well as seeking knowledge and understanding of the ways of Nature. Such as the cycle of the seasons and the wildlife and plant-life in their area. Hedgewitches may know how to grow herbs in a garden, but are more likely to study where and how they grow in the wild and how to gather them. They usually have a great deal of lore on trees and plant life, animals and the wilderness in general. Healing, divination, the use of trance inducing herbs and all manner of fertility and shamanic rites are also a part of this Path.

Hedgewitches tailor their Path to suit themselves, some may focus on herbalism, others study midwifery, some may practice something like reiki, they may focus on animal husbandry, and others may be well versed in healing with crystals. Many Hedgewitches may choose to be a jack of all trades, but a master of none.
While Hedgewitchery is typically a solitary path, this is not always so. Even the most hermit-like Hedgewitch can still be found at the odd local Pagan event. While others may even belong to a Coven, Kindred or Grove.

The daily spiritual practice of a Hedgewitch will be adapted to her individual abilities, interests and life style. One Hedgewitch may start his mornings offering up prayers of thanksgiving to his gods as he collects eggs from the chicken coop. Another Hedgewitch may spend her mornings in quiet meditation on her patio; sipping tea and watching the deer graze in her lawn. A third Hedgewitch may say a quick prayer at the household shrine before racing off to work. The forth Hedgewitch spends his day fasting and preparing for a rite and a trip across the hedge that night.
Tansy
x
Posted by Unknown at 18:17