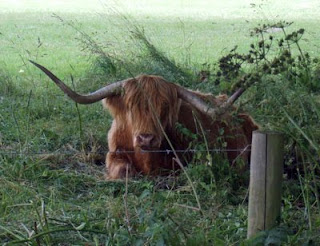 The bull and its female counterpart the cow, have long been symbols of fertility. While the cow is predominantly a symbol of motherhood and nourishment.

While the cow usually embodied lunar aspects, and goddesses sometimes wore horns of the cow, the bull was a symbol of the sun. The Hindu devine being Indra is often depicted riding on a bull, while Brahma is depicted upon a cow.

Bull worship was a part of Egypt and Greece. The Egyptian god Osiris is often depicted with the head of a bull. In Roman and Greek mythology there are several powerful lengends of the bull. Probably the most familiar is the tale of the Minotaur. A study of the myth and lore of the bull may provide insight into past lives for those with this totem.

The bull is masculine and implies a fertilising of the Earth, a Feminine planet in traditional astrology. In the bull then we have the union of the male and female. The horns of the bull resemble the lunar crescent, giving it the link with the feminine.

If the bull has shown up as your totem, you should ask yourself some important questions. Are you being as productive as you can? Do you need to sow some new seeds? Are you being stubborn and rigid? Do you or those around you need to become more sensitive? Are you rushing when you should be allowing things to become fertile in their own time? Ar you or those around you insecure?

The bull can help you understand and work with the mundane aspets of fertility and the relationships necessary for it. It will teach stability without stubborness. The bull can help you to assert your feminine energies with the greatest success. Knowing when to be aggressive. Defending yourself and family. Being content where you are, but also being aware of what may be going on around you. Being alert for danger. Performing difficult work in a conscientious manner. Strength.