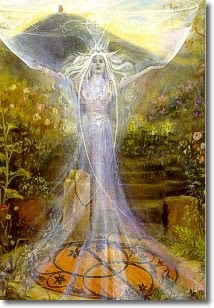 Having called upon the Lady of Avalon in ritual at Glastonbury this past weekend, and having always been intrigued by the Arthurian tales and having Sacred Mists friends talk about her in the past couple of days, I thought I would do some research:
Tansy
x

Much has been written about her and the land of Avalon, Ynes Affalon, which means the Land of Apples. Morgan le Fay is one of these women, and she herself is a half sister of King Arthur, an enchantress, healer, queen, and goddess. Morgana is sometimes regarded as one of the aspects of the goddess Morrigan.

The Lady of the Lake is the name of several related characters who play integral parts in the Arthurian legend. These roles include giving King Arthur his sword Excalibur, taking the dying king to Avalon after the battle of Camlann, enchanting Merlin, and raising Lancelot after the death of his father .

She has been given various names - Argante, Nimue, Viviane, Elaine, Niniane, Nyneve, Nimueh and other variations. The name 'Nimue' is most probably related to 'nemus' 'nymet' meaning 'grove' or 'sacred grove' ( A name which appears frequently in Place- names within North Devon but seldom elsewhere ). Argante is Celtic and means Silver One.

Alfred Tennyson adapted several stories of the Lady of the Lake in his "Idylls of the King." He said that the Lady of the Lake was the good fairy queen Vivian that raised Lancelot, and gave King Arthur Excalibur by holding the sword up from the middle of her Lake. Then he 'demonized' Morgan le Fay as another part of the Lady, who was Arthur's evil half sister and tried to destroy him. Morgan also was said to have stolen the scabbard to Excalibur. Excalibur could never be defeated. The scabbard could heal anyone and Morgan stole that and threw it back into the lake, so that Arthur could be killed.

Yet another aspect of the Lady in Tennyson's tales was Nimue, who seduced Merlin into teaching her all of his magick, and then trapped him in an oak tree or cave. It is likely that all three of these aspects, or queens, were the ones who took King Arthur in a boat to Avalon to be healed after his final battle.

In Caitlin Matthews book, "Ladies of the Lake", there are nine sisters who are priestesses, queens and enchantress-healers, who live on the island of Avalon. Morgana, Igraine, Guinevere, Argante, Nimue, Enid, Kundry, Dindraine, and Ragnell. Argante is the head Lady of the Lake here, although Morgan is the head Lady in other books.

She's a goddess, a faery queen, an elf. These mythical identities may all stem from a real person, or several real persons. She's so many people, with so many names. Perhaps the answer is simple. There were several Ladies of the Lake.

Her genealogy bears this out - the daughter of Igerna, a.k.a. Ygerna ferch Amlawdd. Igerna - also known as Igraine – who is also King Arthur's mother, with her second husband Uther. According to this genealogy, she is indeed three people - Igraine had three daughters: Morganna, Anna, and Elaine. That makes them all half-sisters to Arthur.

Igraine also had a sister, named Gwyar. Gwyar married a man called Gereint. They had a daughter, Tegau. That makes Igraine Tegau's aunt, and the ladies of the lake Tegau's cousins.

The Lady of the Lake is a caring goddess, and a very strong healer. She is wonderful to work with for almost anything. Water signifies dream, then Argante is their queen. She rules over intuition and imagination. Are you looking for inspiration? You may find it with her.

You may find wisdom too. Argante is no stranger to life, death, and rebirth. Perhaps most important of all, in almost all her guises, she's a teacher. She trains priestesses. She's wise. Perhaps if you keep the surface of your mind still, like an unruffled lake, she will teach you too.

Some of her symbols are: apples or flowering apple branches, an enchanted boat or barge that pilots itself, and an Avalonian castle. A gold apple is for immortality, and a red apple is for transformation...either of these are good symbols for her. She is also linked with the sovereignty of the land, water faeries or mermaids, the Green Lady, and of course, Excalibur and its scabbard.

The Lady's home of Avalon is no longer in the real world, but resides just outside of our world. It is possible to go through a portal, usually filled with mists, to get there.She and Her sisters are there waiting to help and advise you, if you will but ask.

I found this poem on the internet but it did not cite an author:

A song is heard in the night
It whispers in the trees
A call for those who seek the place
A guide, A path, A way
Its power leads us ever on
The Voice of Avalon

A Haven, Harbor, Resting place
The hill it offers all
A tribute to her, The radiant Queen
The Lady of Avalon.

Her name she goes by many
To some by none at all
A Friend, A Love, A Mother
She holds these titles too

The Lady always welcomes those
Who seek her sacred place
In Peace and Love and Honesty,
With Loyalty and Grace

They will return again someday
To the Lady’s special realm
For once you’ve been to Avalon
Its precincts journey'd through
You await the day you can return
Posted by Unknown at 12:30