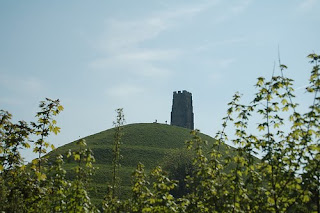 I shall be making a visit to Glastonbury soon, to meet up with a group of lovely Sacred Mists witches to lead my very first 'offline' ritual. I am a little nervous, although I have lead rituals online before, never one outside of the computer ;-) But I am looking forward to it. I have been looking up some information on Glastonbury itself. I have visited a few times before and each time I have been struck by the amazing energy and spiritual feeling the whole town has.

Here is an exerpt from The Goddess in Glastonbury by Kathy Jones, entitled - The Tor Goddess

From a distance the most noticeable feature on the Isle of Avalon is the Tor as She rises out of the flat Summerlands. She sits like a Great Goddess, a huge bounteous female figure in the middle of a landscape bowl or Cauldron. To see Her is to love Her. To the north the Mendip Hills form the rim of the Cauldron while smaller hills lie to the south and east. Stretching out towards the west the land is below sea level.

Her Body is bounteous, fleshy, full of dips and folds. Her large belly, hips and thighs emphasise Her full sexual nature. She is the fecund Goddess of Love, Rhiannon, Aphrodite, Venus, the Morning and the Evening Star. She is Kundalini, rising Serpent Goddess of sexual energy and wisdom. She calls all to union, at-onement with Her. She is Goddess of the waxing Moon. Experienced by women during ovulation, She is full of desire, wisdom and creative potential.

There are many legends surrounding the Tor. It is one of the Hollow Hills where the Faerie Folk now live with their Queen, forced into exile when human beings forgot to acknowledge them. It was around such a Hollow hill at Beltane, that Pwyll, King of the Summerland adoringly followed the Goddess Rhiannon, as She rode on Her white horse. No matter how fast Pwyll rode, Rhiannon always remained the same distance away from him, until he said the right words – "Rhiannon, stop for me". Rhiannon was then happy to stop for him. Their love for each other became legendary.

Rhiannon of the Birds is the Virgin (meaning complete within Herself) Goddess of sexual love, tied to no man, free to love whom She chooses.

Veiled in white She rides a white horse. She is the original powerful sexual image for all brides, now degraded in the patriarchy to symbolising a non-sexual virgin bride who loses her right to sexual freedom when she marries. She belongs to her husband. Rhiannon is also the archetype for Lady Godiva, the shameless woman who rides naked beneath a veil upon a white horse.

Ride a cock horse to Banbury Cross
To see a fine Lady ride on a white horse
With birds as her halo
and bells on her toes,
She shall have music wherever she goes.

Somewhere upon the slopes of the Tor lies the entrance to the Underworld of Annwn and the Cauldron of the Dark Goddess. It may be near Her heart or through Her Yoni. There are tales of subterranean tunnels and caves where strange apparitions lurk, of people who went into the Tor through the hidden entrances, only to return years later old and white-haired or mad. On the north side of the Tor is a manhole cover, where the sound of continuously roaring water can be heard. Beneath this cover is a room belonging to the Water Authority, full of dials and wheels which control the water flow in the reservoir beneath the Tor. Seeing this room makes the idea of underground tunnels seem real.
Luffang

It is not only the underground world of the Tor which holds a mystery. Upon the surface of the Tor there are seven levels of terracing, some easy to see and some lost in part by erosion. These are the present remains of a great three-dimensional maze based upon the same pattern as the ancient Kretan Labrynth of the Goddess. This pattern appears on coins from Krete, one of the major civilisations of the Goddess in the ancient world, on rocks at Tintagel and is found among the Hopi Indians as a symbol for Mother Earth.

The maze is a single pathway which winds back and forth seven times around the steep slopes of the Tor to the centre. The path must be retraced on the way out. There is no choice to be made in the pattern of this maze only to follow, the path and to continue when the going gets tough.

The entrance to the labrynth lies at the western end of the Tor near the bottom of Wellhouse Lane, and is marked by large fallen standing stones. The first turning of the maze is on the third level counting up from the bottom of the Tor and marked by a stone. The labrynth follows a pattern of 3 2 1 4 7 6 5, ending on the fifth outer circuit. It is here that psychically or in the past physically the journeyer in the maze, enters Her Body, near to Her heart. This maze pattern lures the lover of the Goddess to their psychic death within Her depths.

On Krete the pattern of this maze was received by the priestess in ritual communion with Ariadne as the Snake Goddess, source of inspiration and creative sexual energy. The Labrynth was laid out as a ritual dance floor and was sacred to the Moon Goddess in Her three aspects. The sacred Bull horns shaped like the Moon and symbol of the Taurean epoch were to be found at the centre. The ancient Crane dance which uses combinations of nine steps, representing the Ninefold Goddess, was danced into and out of this maze.

The Tor Maze. The pattern of a great three-dimensional maze is marked by terraces on the slopes of the Tor. This maze is based on the Kretan Labrynth or Moon-maze of the Goddess.

The labrynth took on a much more sinister meaning when the Minotaur the dangerous god/man/animal was imprisoned at the centre of a three dimensional Labrynth. The whole story symbolises the takeover of the major peaceful Goddess civilisation by the invading brutalising forces of patriarchy.

Like all mazes the journey to the centre is a journey into the Self to face the divine Goddess and/or the dangerous Minotaur. The seven levels can be viewed as the seven chakras with their associated qualities. They can also be seen as different physical, emotional, mental, psychological and spiritual states which alter as we change direction within the maze and as we climb up and down the slopes of Her Body. The Labrynth represents the fixed pattern of our destiny in Herworld. We cannot change its direction only how we live it.