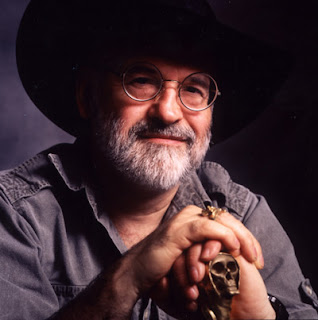 I am a huge Terry Pratchett fan, I absolutely love his books, I even have a couple that Terry autographed. My favourites are the ones with the three witches in (of course!), Witches Abroad probably being my most favourite. The plots are inspired, the characters truly wonderful and although set in fantasy so many things relate to our world and life in general, with a Pratchett twist of course!

Terry Pratchett is one of the most popular authors writing today and is the acclaimed creator of the bestselling Discworld series. The first Discworld novel, The Colour of Magic, was published in 1983 and there are now 37 books in the series. The first Discworld novel for children, The Amazing Maurice and his Educated Rodents, was published in 2001 and was awarded the 2001 Carnegie Medal.

Long regarded as a significant satirist, Pratchett has won numerous literary awards, was appointed OBE in 1998 and has received eight honorary doctorates.

The Discworld series is a continuous history of a world not totally unlike our own, except that it is a flat disc carried on the backs of four elephants astride a giant turtle floating through space, and that it is peopled by, among others, wizards, dwarves, soldiers, thieves, beggars, vampires and witches. Within the history of Discworld, there are many individual stories which can be enjoyed in any order. But reading them in the sequence in which they were written can increase your enjoyment through the accumulation of all the fine detail that contributes to the teeming imaginative complexity of this brilliantly conceived world.

Witches were a bit like cats. They didn’t much like one another’s company, but they did like to know where all the other witches were, just in case they needed them – A Hat Full of Sky

The whole of life is just like watching a film. Only it's as though you always get in ten minutes after the big picture has started, and no-one will tell you the plot, so you have to work it out all yourself from the clues - Moving Pictures

If you haven't read any Terry Pratchett yet - go do it now!!